Philip Radley-Smith, Owner
For Philip Radley-Smith, the owner of i2i Media, 1999, feels just a couple of years ago when he would stream over 56K. The videos back then were the size of a postage stamp, and varied optical illusions were used to make it seem ‘bigger.’ It was also when his company, i2i Media, started developing technology that would later provide them with worldwide patents on wearable computers and displays.

With the advent of Y2K and the technological advancement that it bought along, it became clear that many industries could benefit from streaming video. i2i Media quickly realized that the most beneficial sectors would be film and TV because they were comfortable with video, so it would be easy to focus there first. This also led them to focus heavily on security as their clients might be streaming IP worth billions of dollars. However, that same secure streaming was perfect for healthcare and something as left-field as corporate streaming back and forth to oil rigs.

In 2005, there were three principal companies in the Internet TV landscape—two of them floated on Nasdaq— but i2i Media didn’t. “At the time that was disappointing that we did not float but in hindsight it was to our advantage because both competitors have since imploded where as we have managed to survive 2008 because we didn’t have investors or the worries of the market to distract us,” says Radley-Smith.

Over the years, i2i Media has continued to work on projects that allowed them to build up a big portfolio of IP. Today, the company provides video and display solutions for a wide range of clients ranging from Hollywood studios to local charities. The solutions are based on the technology that they have continually developed and evolved since 1999, including the worldwide patents on wearable computers and displays. “We shied away from developing a single platform, which would effectively just be a machine to reproduce uniform widgets, because it would be far too boring and we would have been putting all of our eggs into one basket. It could be said that this has financially worked against us but equally it might have been our saviour,” mentions Radley-Smith.

Catering to the Customer Needs

One of the key roles that i2i Media fulfills is to crystallize what the customer wants and needs. Radley-Smith informs, “If we get things right, there is a very strong likelihood we are going to surprise them with something that is over and above their original expectations. This is because we can ‘bring to the table’ lots of lateral thinking given our experience.”
i2i Media applies the same policy for its team where the project’s value is never disclosed, and hence, team members never know if they are working on a multimillion-dollar project or if it’s a simple website.
Radley-Smith mentions, “If they were just working on a giant platform it would be hard to feel that their input had any great significance. However, if you are the lead developer on an app for the BBC you can be proud of that and equally be proud of the next project which you might be doing for a health care charity because it’s your work that makes the difference.”

In an instance, i2i Media was imbedded with DreamWorks at key markets. “Just seeing this in the flesh led us to come up with new functionality and features for them which we could build upon and evolve for other customers,” says Radley-Smith.

The same principals apply for customers that are using i2i Media’s apps and the tension that existed between offline and online playback. It was important for everything to work offline, but equally, it was important that offline activity had to be fully reflected and referenced when devices went back online after detecting an internet connection. This tension led i2i Media to develop a portfolio of hybrid technology, a key staple of its IP offerings.

Constant Desire to Push the Envelope

Radley-Smith believes that i2i Media is in a very good position today. They are not caught in the trap of having to bring in many procedures and policies that make companies inflexible and slow at responding. The company has tried hard to resist structures and practices that would tie them down and stifle productivity. As an example of this, i2i Media’s server team proposed that a ticketing system should be implemented for client support, but this was rejected because they didn’t want to become one step removed from the customer. It was thought that it was much better to have a real person for clients to connect with and effectively build a professional bond and trust.

With a global customer base, i2i Media has a constant desire to push the envelope and create new and exciting technologies. “I am aware of other companies who say to customers that they can’t have any improvements or new futures until they are pushed platform wide—at the moment our customers would not accept that and frankly nor would I,” adds Radley-Smith. Further, i2i Media’s fluid and flexible approach ensures that they are never scared of changing direction during a project progression. This is driven by the company’s desire to keep customers happy, so that they can effectively become part of our sales team, and the desire to challenge and stimulate team members.

With the increasing use of OTT and webcams driven by the social changes resulting from COVID-19, i2i Media has been super keen to create new solutions during these last few months but to keep all of this IP in house. “We have also been eager to spread a psychological ownership of the project within the company so that as many people as possible have a connection with it and hopefully pride in what we are doing,” informs Radley-Smith.

Although i2i Media thrives by working on new products and bespoke solutions, the company realizes that the big financial rewards are in platforms that produce uniform widgets. They have grown well over the years, and are going to have to balance its bespoke work with more of a uniform platform solution presently being developed in house. In addition, i2i Media will need to move out of its comfort zone and work with external financing to enable the platform to have a mass-market presence over multiple sectors. “In some ways that’s a scary thought because we have always been in complete control but equally to go really big you have to take chances and you have to bring on board partners,” says Radley-Smith. “Whatever the future holds. I am eager to keep in mind the things that distinguish us such as exciting projects, to go the extra mile for customers, and to give individual team members a sense of ownership and pride in their work.”

Description
i2i Media is an award winning provider of internet and streaming video solution for companies worldwide. Over the years, i2i Media has continued to work on projects that allowed them to build up a big portfolio of IP. Today, the company provides video and display solutions for a wide range of clients ranging from Hollywood studios to local charities. One of the key roles that i2i Media fulfills is to crystallize what the customer wants and needs. With the increasing use of OTT and webcams driven by the social changes resulting from COVID-19, i2i Media has been super keen to create new solutions during these last few months but to keep all of this IP in house 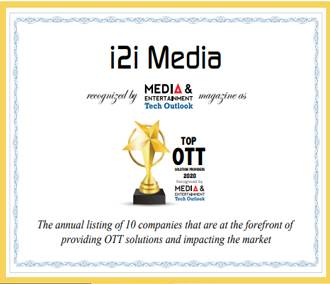